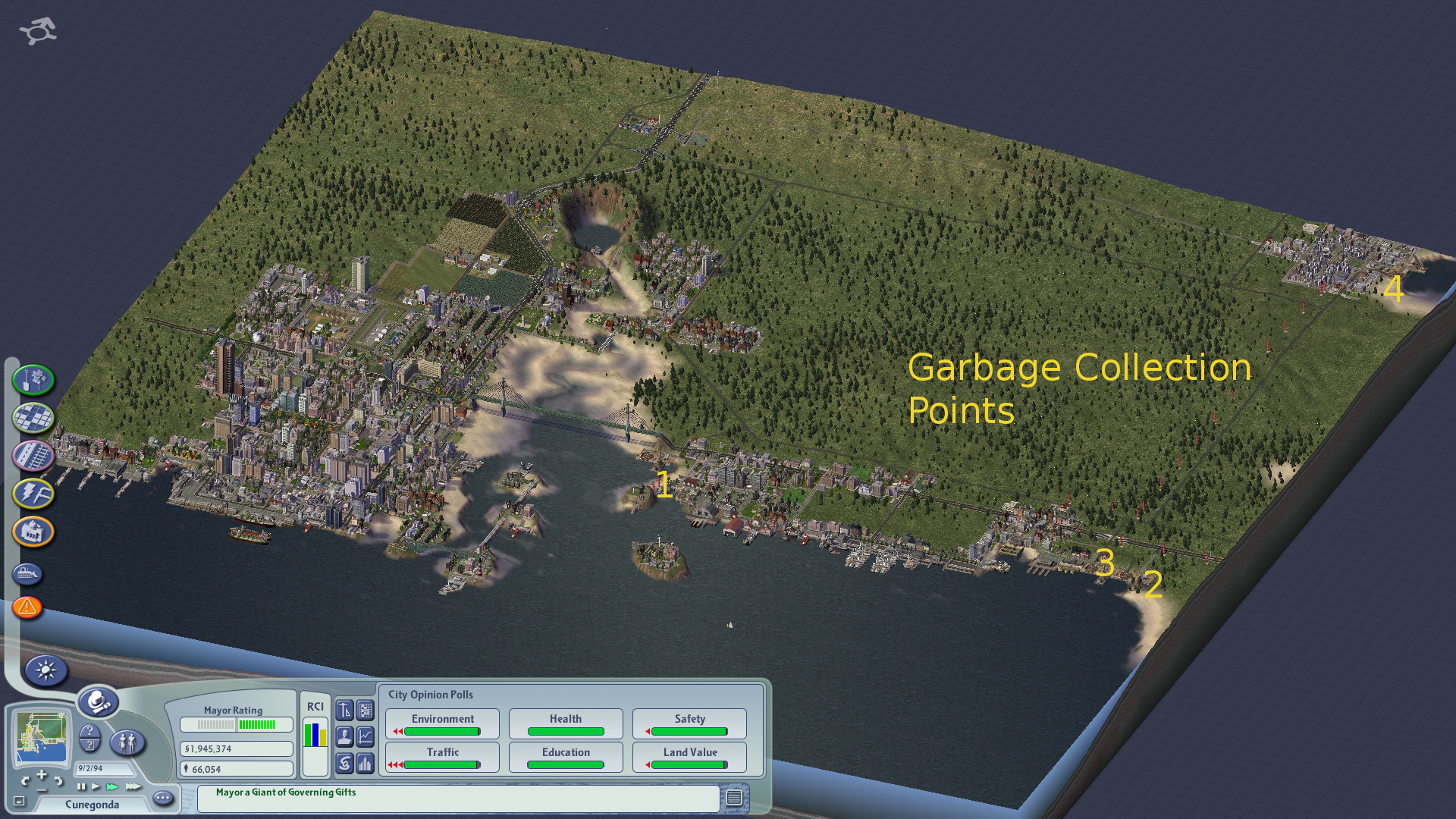 Understandably, my demand for C skyrockets, so I build a lot. I also plunk down a bunch of I-zone Additionally, my income which, granted, only supports fire, hospital, water, and power is about 2k net profit. So I'm guessing that the connection to my other town is sending workers over and my C is being filled by the locals. What I'm trying to figure out, though, is what the best move is. What do you guys think? I've been thinking that I could work towards edumakating my town, and see what happens Bring up your detailed budget. One of the sections is "Neighbor Deals.

Also, how do you get commercial to do well? It seems every time i set up a new city industry does well but commercial sucks. Figured I'd relate an interesting experiment, and see if you guys can figure out what's happening: I started up a city in a new square the smallest size , and used a trainer to get a lot of money. Like, more money than I'd ever need Like, 4. I divided it into sort of quarters, with an open area in the middle. The other three quarters I filled with mostly residential, with HD industrial on the edges and HD commercial clustered near the airport.

In the empty area in the center, I put my schools, hospitals, police etc.

How to Make Money in SimCity 4: 6 Steps (with Pictures) - wikiHow

Fully funded, they reach all the residential nicely. Well, except for the elementary schools, of which there are 3 scattered abour the map. I'm losing money hand over fist, of course, but this wasn't intended to be a valid money-making city. But now comes the weird part: my population is stuck at about , and has been for a long time. I re-zoned most of the residential to mid or high-density, and a few changed to apartments, but the population is staying the same. How can I get more people to move in? Pretty much it should be a dream city, yet nobody wants to move in - squeaky clean, tons of available jobs, great standard of living, etc.

There's plenty of room in the residential zones, if they want to increase the density a little.


But they won't. Some interesting things I've noticed: - all my sims are old. Like, average age of something old. It's very weird. Education is almost for everyone. There's no traffic to speak of. No air pollution whatsoever. I planted trees all around the airport, and most if the industry is high-tech. So why doesn't anyone want to move in? What can I do to convince them? Polyester - Maybe you're hitting a population cap?

I would say build a neighboring city. I don't think it has been stressed much, but when I built neighboring cities around a larger central city the population grew almost faster than I could zone for it. I usually setup each city so that it specializes in something Then interconnect them with roads, rail and highway. I'm still working on this setup though, and this plan seems to be working well so far. I try to zone it away from industry, and commercial seems to like lots of trees and plazas. I've always had the best luck when there is at least times as much residential zoned than commercial.

You should be able to check desirability to see where commerce wants to be zoned too From what I've read earlier in this thread and from problems I've run into with my own cities , a large portion of the jobs even I-HT come from people that aren't in the wealthy tax brackets. In other words, if all your population is super-rich, they aren't going to want to do the work As someone told me earlier, you don't want your city to all be super-wealthy I can make a low-pop, medium income area I found that if I lowered my taxes on C to 3.

I then upped them to 5. I'm not sure what will happen in the long run as I say, I'm at 2k income or so at 5 years, if that Yeah, i did that, and I have all other kinds of neighbor deals going, but it won't let me do trash. If you're going the other way importing power or water, or exporting garbage , there are three conditions: Neighbor Connections You must have enough money to cover a year of the deal The other part must have a surplus of the resource greater than the minimum deal amount of 1, units My problem with power was that the EXPORTING City only had or so extra units, since I was funding my coal plant way lower than capacity.

I added capacity by increasing funding and bang, new neighbor deal. But something is funny with the deals anyway. I got it to work, then exited without saving. I then ran the game until I ran out of wind power in the Importing city; I tried to get a neighbor deal and it didn't work. Had plenty of money, power to export in the new city, and connections. I just gave up and built another plant. Commercial always sucks early in the game.

And that won't happen until you get your education up. Early on, just about all your jobs are going to be in Industry or Agriculture, if you go that way. I don't. Once it does, mix some of your new Commercial zones in with your Residential. It makes things convenient for the Sims, and increases traffic for the businesses. So A Good Thing. Dirty Industry seems to be just very short lived. I dunno whether that's by design or what. But the ones in my I zone usually last just a few months then shut down. So I bulldoze them away, and a new one hopefully pops up to replace it.

It yours seems permanently stifled, then you'll need to do the usual checks to see what might be bothering them. Sufficient power, water, workforce? Good freight access you should always have at least a rail connection outside the square -- a freight depot is optional, but apparently not absolutely required. Commute for the workers ok? I pretty much always rely only on trains and buses for that. Much easier not having to worry about the traffic.

How about the tax rate? If you lower it a point or so, does the I demand move back up a bit? Remember that most of your money is going to be coming from your residents, at least given the usual general mix. 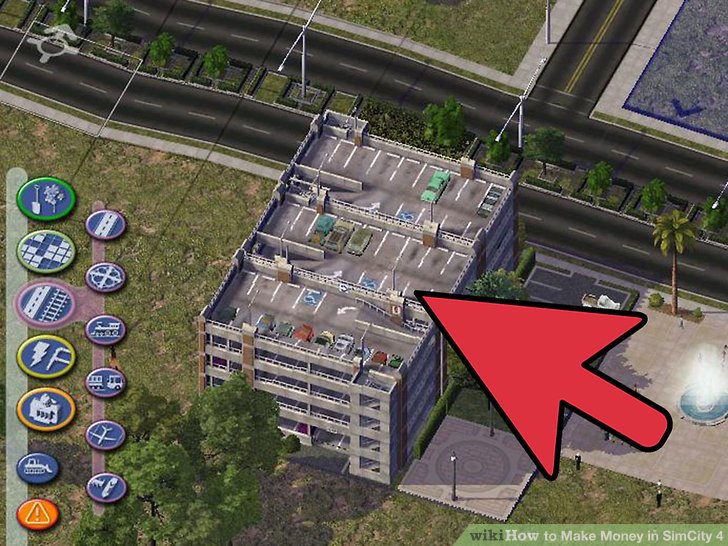 So it might be worthwhile to try dropping the tax rate on I and C, just so you can get more R to move in. But this file is 4 Mb, whereas the one available elsewhere beforehand was 18 Mb! What's going on? What's on the Bonus CD? Anything noteable? Is it possible to buy separately?

A couple of questions, I have a few cities in the game with various questions. First of all how do you effectivlly use railroads for Industries? I placed a station near the Industries and one near my commercial with a rail connecting them, and they just sat there with zero use I have quite a few Industries too, so that part wasn't lacking. Is his name Homer SIMson? Has anyone had any problems with the game running?

I've been playing it for about a week now and since my cities are larger I changed the graphics down to x 16bit so it would run smoother, when the towns were small it would run fast and smooth, but as they grew and grew it would get a little slower and slower, so I thought I'd change the display settings. Moderator et Subscriptor. Ars Tribunus Angusticlavius et Subscriptor. Station One Clear. Pick plains. At first you have the chance to be "God" and create valleys, mountains, mesas, lakes, animals, and so on.

I suggest making a plateau in the center and covering the land with trees. Do not make animals! Eventually you will destroy their habitat and make the llama people aggravated.

A brief comparrission to Sim City 4

Once you've created a sensible and mostly flat region,turn on mayor mode and name your city any desirable name of your choosing. Choose what to build and develop first. The key in making a successful city is the order in which you build things. Another vital ingredient is extreme patience. All of my successful cities took hours of careful placement and risky decisions. In the long run, they all pay off. Anyway,the first thing you should do is place a natural gas power plant in the corner of your city. Place a road adjacent to it and drag it down to the bottom middle of your city.

Once there create a decent sized medium-residential zone and at least one medium sized park. Drag a power line from the plant to the neighborhood. Stop there and pause the simulation. Unlike Sim city 1, 2, and 3, you do not need to create every single building and rely on resource trade. Sim City 4 will cream you if you use this tactic. Instead you will rely on taxes. Although neighbor deals can be helpful you have to create a city to deal with. There are no already-made cities neighboring you.

So you will need to open the tax menu and crank high, medium, and low wealth residential taxes to at least 8. Move Commercial taxes to 7.

Make some money. Go to the city ordinance menu. First click "legalize gambling". This will add dollars to your income. Then click the "smoke detector ordinance". I will explain that one later. Go back to the power plant and take its funding down to one light bulb efficiency. This will help a lot. Create a small area of dense industry away from the neighborhood and near the power plant.

Make sure it has road connection, otherwise it can't create jobs and will be a waste of your your money. Now make a road connection above the power plant and create some agricultural zones. I know what your thinking but skyscrapers and big cities won't be here for a while. All of my successful cities started as cruddy industry towns or rural villages.

Expand your medium density neighborhood just a little. Remember do not build civic buildings or water systems yet. At this point they are not mandatory. Wait a bit and let things happen. Your city population should have at least residents before the next step. Now on the far side of your neighborhood, away from pollution and power plants, create a small low-density commercial center.

Do not make it big! Commercial zoning is very important, if it overwhelms the residents, it will be abandoned, but if it is ignored, it will never grow mid and high wealth office. Wait until your population reaches for this next step. By now you have the mayors house and should have placed it in the neighborhood. It will attract mid and high wealth residents after a while.

Now your income should be at least away from your expense. And you should be pulling in some small cash now. Now lets build some civic. We can only afford one thing right now, so we don't break budget. On one side of the neighborhood build an elementary school. Look at the number of students.


It should be far from the maximum capacity. Take the funding down to a point where the capacity is about 20 over how many students you have. Now on the other side of the neighborhood build one local library. It's funding should be simultaneous to the school. Leave it that way. Now expand the residential area a little more and build one more farm then let the game sit for a while.

At this point you should have a population between and 1, Hopefully you've at least reached 1, 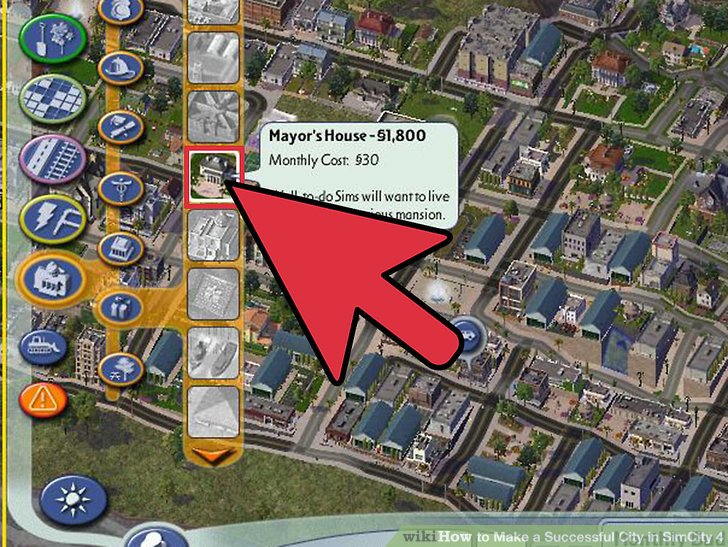 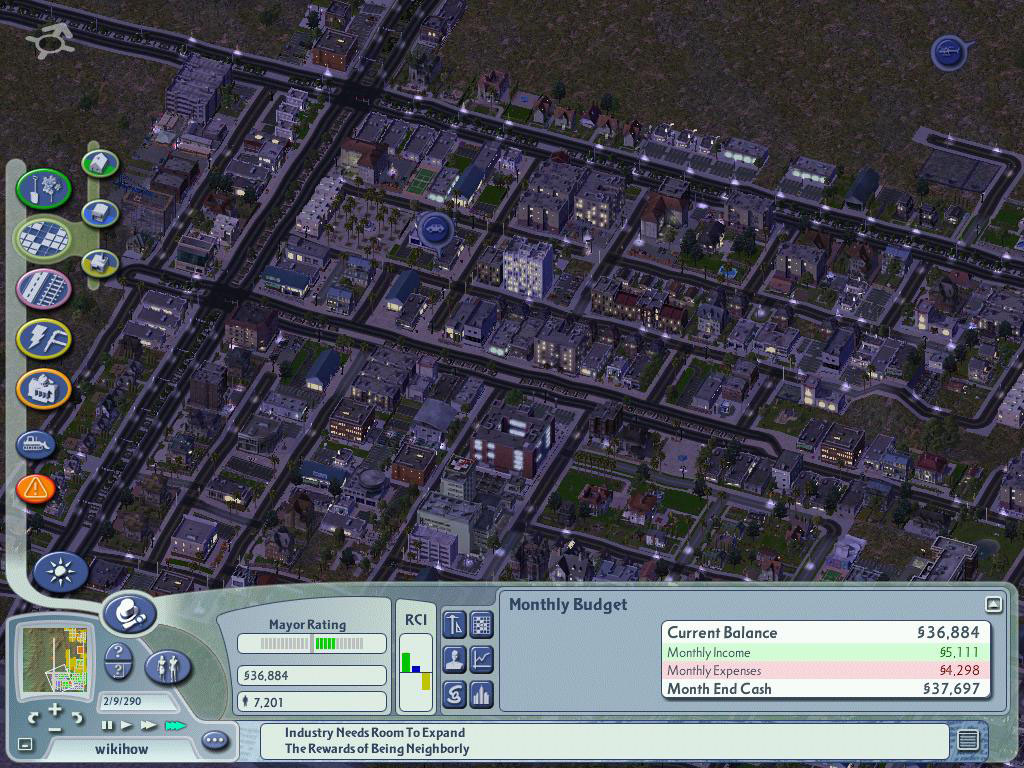 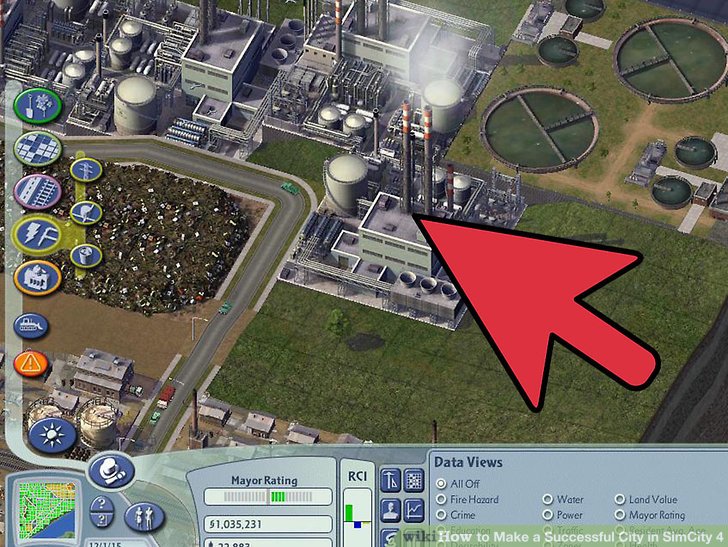 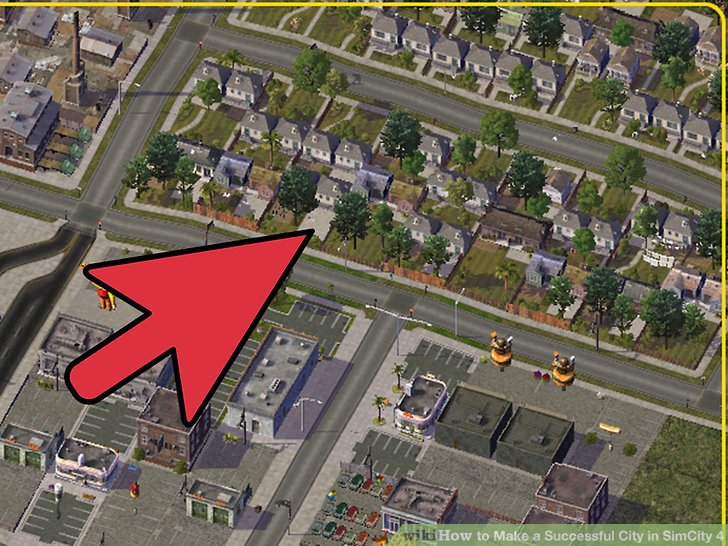 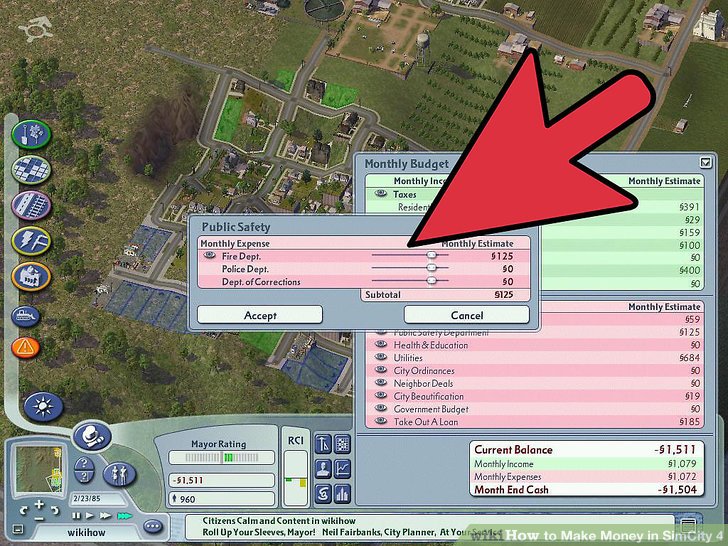 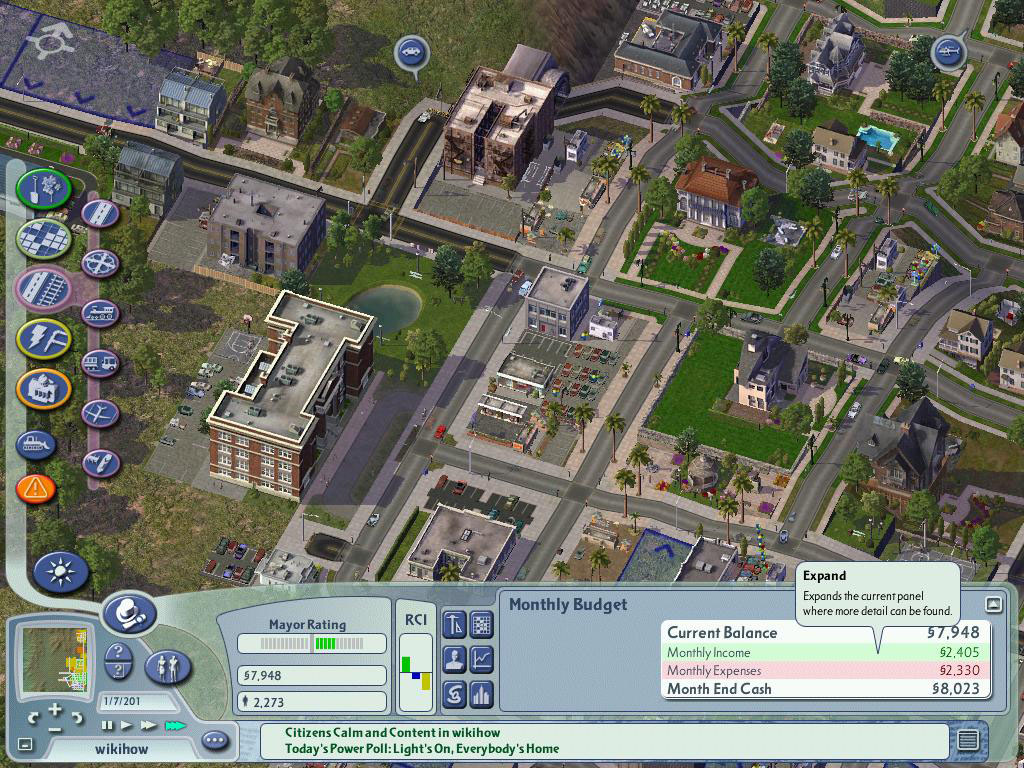